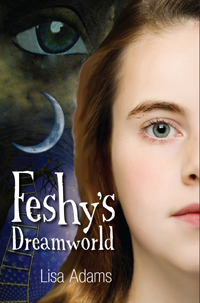 Feshy's Dreamworld is the story of Amber Lavery, a fifth grader who believes herself to be struggling with mental illness because she has visions of people and creatures that aren't there. Here's the big, dramatic synopsis from the book jacket:

When you die in your dream, do you really die?

Amber Lavery knows she’s sick—or crazy. For years she’s had visions of people and creatures that aren’t really there.

But when Michael, the smartest kid in her class, reveals a wonderful secret, Amber learns that these visions give both of them special abilities in the world of dreams.

Together, Amber and Michael venture into the ever-changing dreamworld, the home of all their fantasies and fears—and a magical creature named Feshy.

But at what price?

OOOOOH, you're freaked out, aren't you? I KNEW IT! Well, don't worry. it's a good little book.

Feshy has definitely been a long time coming. I started writing a simpler form of the book, originally called Feshy’s Paradise, in 1999. Though that draft was the elementary age novel I wanted to write, … Continue reading →

Posted on December 26, 2012 by Lisa · Leave a comment
RECENT POSTS (ALL TOPICS)
All Categories
Archives
Meta